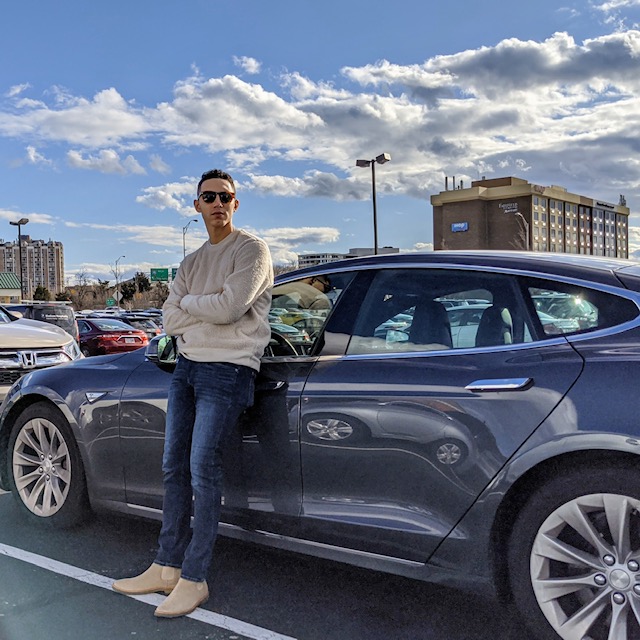 At Steer, we pride ourselves on VIP service and ensuring that our members are not only happy with their vehicles, but also fully informed about how to operate them and taking full advantage of everything included within their subscription.

With that in mind, here is the first in what will be a continuing series of interviews with Steer members. We'll feature real people in the DMV area that use Steer, to illustrate first hand what it's like to have a membership and how it affects their everyday lives. We hope this series will help give readers a better sense of what it's like to transition from a gas to an electric car, as well as how to get the most out of your membership.

Tell us about yourself.

I've been in the DC area for about a year-and-a-half. I'm from the New Jersey/Philadelphia area. I moved here to do a year of military service, and at the moment, I've completed my military service. Recently I've been doing a lot of online marketing and freelance social media marketing. So right now, I'm a self-employed entrepreneur.

How did you first hear about Steer?

It was either Facebook or Instagram where it first caught my eye. I inquired about some information, received a phone call, couldn't say no to a nice start-up deal and figured I'd try it out.

I was in the market for a car as well. I was actually leasing through Fair, and I was having a lot of problems with the car. So I gave it back and then at the same time I heard about Steer, and then that's why I decided to go with Steer.

What kind of car were you driving before?

I was driving a 2017 Hyundai Genesis.

I think it was just the selection of vehicles. I like the idea of an electric vehicle, and the all-in-one price just works well for me. It might seem a little high, but when you really break down the numbers, you're getting a really good deal.

Even though I haven't fully taken advantage of swapping in and out of the vehicles, I think just having that option if I was to need a bigger vehicle. Having that versatility is what I like the most.

I also like the low commitment month-to-month kind of thing.

Tell us about your experience with charging your car. Has it been an easy process to learn?

I love it. I'm close to the Springfield Mall which has a supercharger, so me and the kids go take it to the charger, get some food, and it's charged up by the time we're done, so it's very simple.

Even if I go take it to the family to New Jersey, I only stopped at one rest stop to charge up. It's really not complicated. I think what I like about Steer is you kind of get a feel for if you like [driving an electric vehicle], and if you can do it, before, if say, I was to actually buy my own.

But I'm used to the subscription thing, so I don't have any urge to buy one. I like this method.

What effect has your Steer membership had on your career?

It was good content (good photos for Instagram, and video for YouTube), and it looks cool to be driving in a Tesla. I'm driving around in a Tesla, so everybody's like, "man, he must be doing something right."

If I show up to a meeting with someone and I'm pulling up in a Tesla, I think the perception is that I'm doing well, and it's all about perception. If I pull up in a car that's going to break down any day now, they might not take me as seriously as if I'm pulling up in a brand new 2020 Tesla.

For my Instagram photos, if I take a picture next to a Tesla, that's getting more attention than the Hyundai Genesis I had before!

How are you using the car?

It's my go-to. I drive it primarily, I take the kids to school, and it's my daily driver.

Do you own/drive any other vehicles?

We also own a Toyota Prius.

What do you think we could do to improve Steer?

I don't have any complaints. Everything's been smooth.

For the exchange of the cars, we met up where I was working in Arlington, so it's really easy communication between the concierge with text. Everything's really smooth. I honestly don't have any complaints.

I know when I read the comments to the ads, it's always about the price, but I understand that it's obviously business, and the deal is still there.

Through YouTube videos, the kids know about Tesla's, and for them to actually be in one, they love it. They go to school and they tell their friends.

While we're waiting in line in the morning, we're able to watch Netflix now. So they love the Tesla, and I'm like a "cool dad" now because I'm dropping them off in the Tesla.

At Steer, we're thrilled to hear that Santos is happy with his Steer subscription.

He's taking full advantage of everything Steer has to offer, and he's seeing the benefits in multiple areas of his life. To Santos himself, the experience has been great, both by upgrading his vehicle, as well as providing customer service to make his driving experience with us as hassle-free as possible. He's seeing benefits in his professional life, both online and offline. And to top it off, his kids love it too!