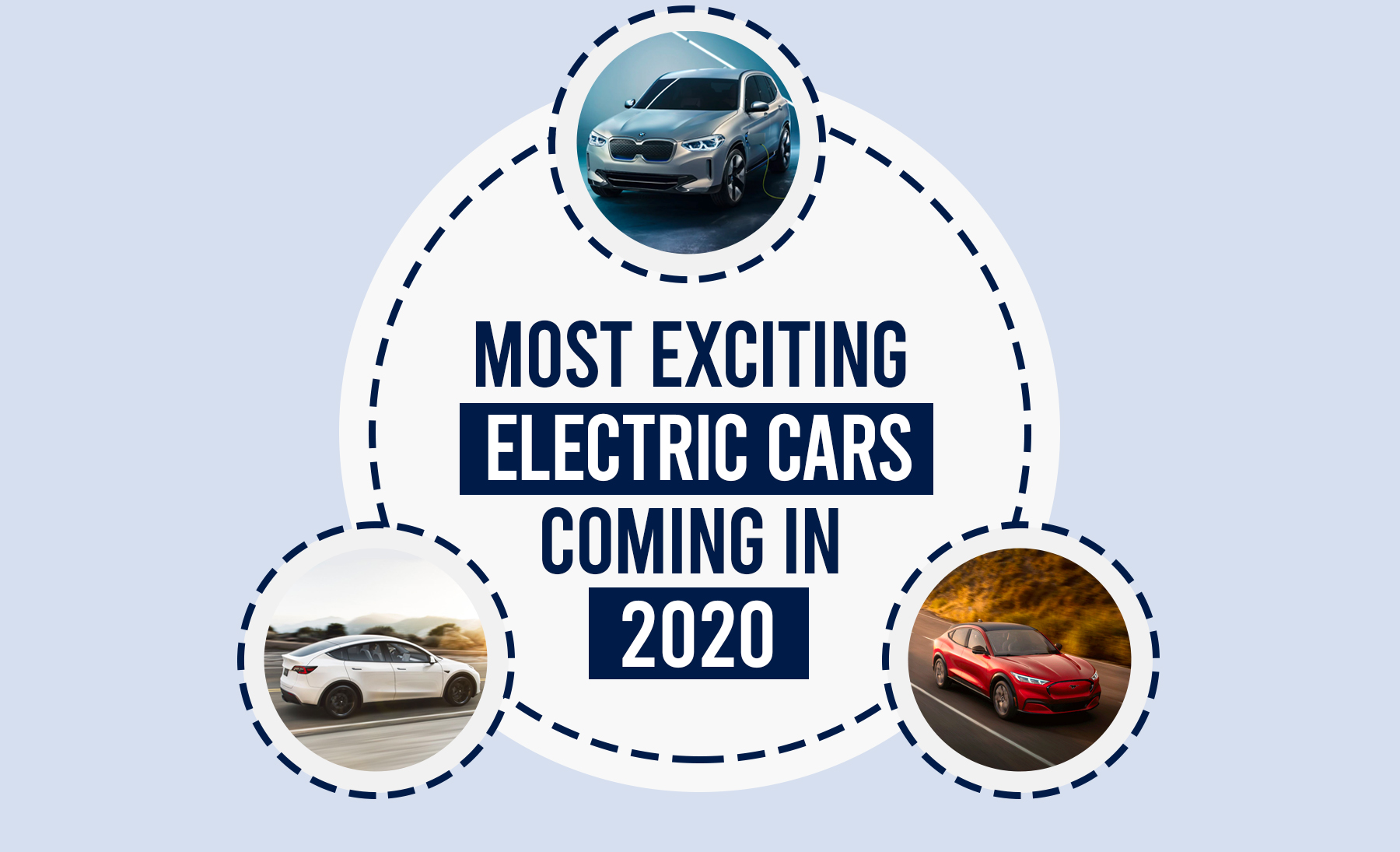 9 Most Exciting Electric Cars Coming In 2020

One thing is for sure – the 2020s decade will be a defining moment for electric vehicles. According to a forecast by the International Energy Agency, by the end of this decade, there will be at least 125 million electric vehicles on the road.

Of course, the electric vehicles will be faster with longer miles of range, more advanced AI, and shorter recharging time than the previous decade. Most of the traditional automakers such as Ford, Mercedes, Fiat, Toyota, Nissan, Hyundai, Honda, and Porsche already got something up their sleeves trying to catch up with the electric vehicle industry.

Even Sony, a company famous for manufacturing electronic gadgets but not cars, unveiled an electric AI car at the recently concluded 2020 Consumer Electronics Show in Las Vegas.

The stage is set for a big showdown, and it all begins this year. Here are the most exciting electric cars coming in 2020.

According to Elon Musk, Tesla Model Y will probably have more demand than all Tesla cars combined. Far-fetched? Maybe not! The Model Y will be a compact crossover electric vehicle similar to the Model 3, but more advanced. It looks like the big brother of Model 3, sharing at least 75 percent of the components.

Anyway, what makes the Tesla Model Y one of the most anticipated electric cars coming out in 2020? Besides using the latest advanced manufacturing technology, it will be about 10 percent bigger than the Model 3, allowing it to accommodate seven adult passengers comfortably.

Tesla CEO Elon Musk also confirmed the upcoming Tesla Model Y would feature EPA range of up to 300 miles. However, performance and standard trim models will have a driving range of 280 miles and 230 miles, respectively. Quite impressive, the performance range trim is expected to peak from zero to sixty miles per hour in just 3.5 seconds and a top speed of 150 miles. The charge time? It will take about 40 minutes to charge from almost empty to 80 percent.

Like the Model 3, it will have self-driving assistance and entertainment features that prevent the driver from distractions. The Model Y is expected to be coming in the summer of 2020.

It will be a five-seater SUV available in five different trims. The minimum range on a full battery will be 210 miles, while the premium version will go up to 300 miles.

With Ford’s direction towards the future, the Ford Mustang Mach-E will feature CoPilot 360 advanced driver assistance tech. The newest version of the Sync infotainment system will be more convenient with features such as voice recognition, Apple CarPlay, Android Auto, and cloud-based connection. Besides that, the software will tell you the nearest places to charge your electric vehicle.

Both all-wheel drive and rear-wheel drive configurations will be available, and the charging rates will vary depending on the trim level. For instance, the standard Mach-E is expected to fast charge from 10 percent to 80 percent in 38 minutes.

Scheduled to hit the market in late 2020, the Rivian R1T truck is expected to be a direct competitor of the Tesla Cyber truck.

What makes it outstanding? First, it’s an electric five-seater truck that promises to deliver up to 400 miles range after charge, which is exceptional for an electric vehicle and puts it well ahead of the competition. Even the cheaper option will have a minimum range of 230 miles, followed by 300 miles. The battery packs configuration will be 105 kWh, 135 kWh or 180 kWh. A charge from 5 percent to 80 percent will probably take 50 minutes.

The quickest version with 754 horsepower will be capable of accelerating from zero to 60 miles per hour in just 3 seconds. Mind you, it’s a heavy truck that can move more than 11,000 pounds. Even so, the top speed is 125 miles per hour, and all versions will include an all-wheel-drive configuration.

The controls will be integrated with Amazon’s Alexa, which probably has something to do with Amazon investing 700 million dollars into Rivian so they could develop 100,000 electric delivery vans for Amazon.

Its other sibling with almost similar specs, the Rivian R1S SUV, will be released shortly after the R1T truck is available for consumers.

The Porsche Taycan (pronounced ‘tie-khan’) is something special; it’s Porsche’s first fully electric vehicle. For a company that has won the Le Mans 19 times, Porsche thrives on building some of the best sports cars, and the Taycan doesn’t disappoint. Of course, the Porsche Taycan isn’t built to endure 24-hour race in Le Mans, but it can travel up to 279 miles after a charge. However, the Taycan Turbo S comes with a range of 257 miles.

In tune with Porsche’s philosophy of breaking new grounds, the Taycan is the first EV to be powered by an 800-volt electrical system. In other words, if you go on a coffee break and charge it for 5 minutes, that will be enough to cover 62 miles of range. You can supercharge it from 5 percent to 80 percent in about 22 minutes. Mind you that is twice as good as most electric cars.

The Taycan Turbo S delivers 761 horsepower, which is superfast to accelerate from zero to 60 miles per hour in just 2.8 seconds. Even the slower version of Taycan Turbo with 680 horsepower doesn’t lag too far behind since it can do that in 3.2 seconds. The maximum speed is 162 miles per hour, thus making it faster than most electric cars.

If you can afford it, you don’t have to wait. Those who ordered it early are receiving the delivery this month (January 2020).

Inspired by the BMW X3, this upcoming EV will utilize the fifth-generation eDrive tech, which makes it possible to combine the power electronics, electric motor, and transmission into a single unit.

According to BMW, the battery will have a capacity of around 74 kWh, and it will be able to fast charge in less than 30 minutes. The range will be at least 250 miles with an output of 286 horsepower plus torque of 295-pound feet. By contrast, that isn’t much of a power difference compared to the gasoline-powered BMW X3. Nevertheless, it reduces the total emissions by 30 percent less than its X3 diesel counterpart.

The 2020 model will be a plug-in hybrid, but BMW has already announced that the 2021 model will be fully electric, expected to hit dealers in late 2020. Additionally, for the earliest versions, the models will only be available in rear-wheel drive; but it’s scheduled for an all-wheel-drive to be introduced later.

Behold, the eagerly anticipated Tesla Roadster, scheduled to hit the streets in 2020. It would be an understatement to call it a mean machine since if it delivers as expected, it will be one of the fastest street-legal cars in the United States.

How fast is it? It can accelerate from zero to sixty miles per hour in just 1.9 seconds, it can make a quarter-mile sprint in 8.8 seconds, and Elon Musk has promised it will have a top speed of more than 250 miles per hour.

Let’s be honest – Tesla is making this superfast electric car to prove naysayers wrong. Besides the incredible speed, it will be powered by 200 kWh battery which is enough to cover 620 miles range. Too good to be true? Well, let’s just wait and see until it’s released in late 2020.

Also, it will be a four-seater and all-wheel-drive electric vehicle. What’s not to love about it?

If you haven’t heard about Polestar, it started as a racing team before Volvo acquired it. Now the team behind it makes electric performance cars, and the Polestar 2 is their second production car. Judging by the success of the Polestar 1, which had the longest e-range for a plug-in hybrid electric vehicle, the Polestar 2 might just surprise us.

Unlike its predecessor, it will be an all-electric vehicle that incorporates the height design of a crossover and the rear slant of a coupe. The unusual dynamics makes it look like a futuristic vehicle.

Speaking of performance, the Polestar 2 is packed with a 78kWH water-cooled battery and a power capacity of 300kW. Each axle will be connected to two electric motors to deliver 408 horsepower. The estimated acceleration from 0 to 62 miles per hour will take 4.7 seconds. In addition to that, the expected charge time from 10 percent to 80 percent when using a fast-charging station is half an hour.

Moreover, the Polestar 2 is an all-wheel drive, and it can go up to 275 miles on a single charge. Also, it will come with an 11-inch Android infotainment system and something known as “phone as key” feature that allows owners to send the keys virtually to another user through a smartphone. How cool is that?

Well, here is the surprise; the Polestar 2 can tow up to 3,300 pounds. Go figure – that is more than any compact electric vehicle currently out on the market.

The Polestar is expected to be released in June 2020.

Since the Volkswagen ID.3 will only be available in Europe and China, the ID.4 is the electric model that Volkswagen plans to introduce in the United States. The design is based on the ID Crozz concept car that was unveiled in 2017 at the Frankfurt Motor show.

In terms of specs, the ID.4 will have a range of up to 310 miles, and it will be available in dual motor and all-wheel drive options. Not to mention, it will be equipped with an 83 kWh battery and a system output of 225 kW. Thanks to the fast charge technology, it will be possible to charge it in about 30 minutes. In case you’re wondering, it will be a crossover EV bigger than the ID.3 but almost the same size as Volkswagen Tiguan.

Most likely, the Volkswagen ID.4 will feature an autonomous driving system and driver assistance technology to enhance safety.

We’re expecting this electric car to be coming in late 2020.

This upcoming electric vehicle looks like a mini hatch with a three-door body and a minimalist design approach. Sure, the Mini Electric is small and doesn’t offer groundbreaking performance specs, but it will be the cheapest electric vehicle ever made by BMW.

Under the floor between the rear and front seats, you will find a 32.6kWh T shaped battery; it won’t interfere with the boot space. The EV features a Combined Charging System (CCS) socket that supports rapid charge; hence it can charge up to 80 percent in 35 minutes.

The 181 horsepower and acceleration of 0 to 62 miles per hour in 7.5 seconds make it the slowest car on this list. But then again, Mini Electric isn’t built for speed but convenience. Similarly, with a range of 146 miles, front-wheel drive, and a top speed of 93 miles per hour, this is a type of car that would be ideal for those who reside in urban areas with easy access to charging stations. Probably a car you can use to commute to nearby places while spending less on fuel and cutting off emissions.

The Mini Electric is expected to be coming in March 2020.

Electric Cars in 2020 and Beyond

When history books talk about the revolution of electric vehicles, 2020 could be the year that kickstarts the momentum. From an electric supercar that is set to become the fastest street-legal car in the world to an electric truck that can haul more than 11,000 pounds, 2020 is going to be an exciting year.

Mark your calendar! The future is already here, and it would be a shame if you miss out.

Excited about all of these and can’t decide on just one? With Steer, you can get access to them all! Be the first to drive them as they join the Steer fleet in 2020. Learn more here!